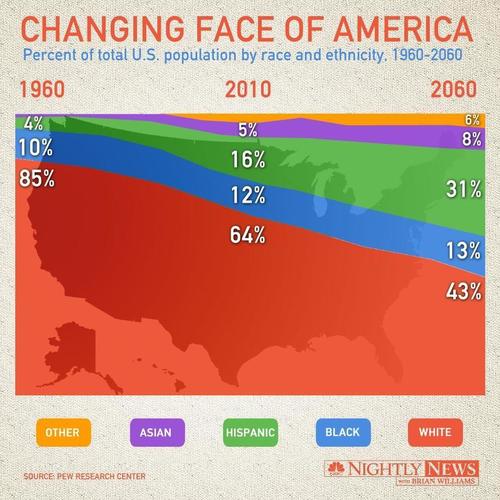 The country is slowly becoming more like a “rainbow,” according to a new book by Paul Taylor and the Pew Research called “The Next America.&qu…

Senator Ted Cruz has been called many things during his time in Congress. To many of his own colleagues who feel he’s too extreme, he’s a “thorn in the side” of the Republican Party. He’s also been called a “firebrand” for his ability to energize and increase supporters of the fringe Tea Party movement. In fact, MotherJones.com calls him the “Tea Party wonder boy.”

END_OF_DOCUMENT_TOKEN_TO_BE_REPLACED

Hatred and intolerance can take many forms. Some are obvious- racism, sexism, homophobia. But there’s something else not often called hatred or intolerance, but that is just as destructive- a mean, callous disregard for the poor and the working class and their needs. I think about this as food stamps are being cut and unemployment benefits are allowed to expire.

I’d imagine that Dr. King felt any and every kind of hatred can paralyze, confuse, and darken a society as much as it can life overall. We’d do well to remember his words.

He’s no longer with us, but that shouldn’t stop us from continuing his work.

Just this month, the Republican-controlled House of Representatives voted to slash $40 billion from the federal food stamp program. The unemployment rate in the U.S. is still high, and the economy is still slow. Many people are still without health care. Homeless shelters are actually closing in some cities.

Oh, and the new iPhone 5s has sold out! The price is around $600, and more if you want extra features. And it’s sold out. Yes, that many people bought it as soon as it was available.

Where are our priorities?

Teens are actually getting fed up with Facebook, according to a report released Tuesday by the Pew Research Center. The study surveyed 802 teens between the ages of 12 and 17 last September about their Facebook use. An article was written about the report’s findings by the Huffington Post on May 21 of this year.

The report’s findings are no doubt troubling to Facebook, given that the teen demographic has long been crucial to its massive success. The root of the “problem” (which is most likely what Facebook’s investors are calling it) is spelled out thus in the report of the study:

“Facebook has become a ‘social burden‘ for teens. While Facebook is still deeply integrated in teens’ everyday lives, it is sometimes seen as a utility and an obligation rather than an exciting new platform that teens can claim as their own. Facebook, teens say, has been overrun by parents, fuels unnecessary social “drama” and gives a mouthpiece to annoying oversharers who drone on about inane events in their lives.”

The Huffington Post summed up another important part of the study:

“They’re deleting, lying and blocking- Some three-quarters of Facebook users have purged friends on Facebook, 58 percent have edited or deleted content they’ve shared and 26 percent have tried to protect their privacy by sharing false information. Among all teens online (not just Facebook users), 39 percent have lied about their age.”

In some ways, the results are surprising- most people, teens and adults alike, have Facebook pages. In fact, a majority of the teens in the study, including those that complained about the site, still maintain pages on it. Some said that they continue using the site because they want to stay up on the social scene. Yet, as the study clearly shows, a large portion of their Facebook social circles are not real-life friends. A second possible reason for continued use of the site, though not suggested in the report, could be peer-pressure. Teens are very sensitive to what their peers say and do, and feel that if they don’t follow the crowd, they will be socially penalized by way of bullying or simple exclusion from peer activities, such as parties and dating.

To adults who have either never used the site, have an account but use it rarely, or have had accounts and deleted them, the news comes as no surprise. These adults often give the same reasons as the teens in the study for their own lack of interest in Facebook. Which begs the question- is Facebook just a failed social experiment, or is it here to stay? It seems society (and the social media industry) has yet to fully understand the human mind enough to properly predict how it will respond to new technology. After all, we didn’t exactly evolve to meet and interact with each other using machines.

Endless pursuit of the perfect match may reveal a misguided quest for self-love.

If a woman has a negative self-image and generally feels poorly about herself, she may work tirelessly to find a cure by securing a perfect match. As a result, she may find herself perpetually caught in a cycle of working to attain male desire and feeling high once it is temporarily achieved. But of course, when the match turns out not to be a good one, the high is often followed by a crushing low. All of which can play out over a few hours or a much longer period of time.
When self-esteem is lacking, it is tempting to outsource a sense of self through associating with an idealized match. Unfortunately, until self-love is present within, true love and care from outside evade. If self-esteem lags, it is easier to focus attention on finding the perfect mate than it is to develop and achieve broader goals for the self. Attaching self-esteem to a romanticized other becomes a way to feel a sense of love that perhaps a woman cannot feel for herself, in her own head. Placing romantic partners on a pedestal is a way to make up for the self-worth deficit. If the man seems confident, sexy, high achieving, then suddenly the woman feels better about herself, almost as if she is him. Failing to harness her own self-esteem, she leans heavily on his.
As a general rule of thumb, the more obsessed and ruminative a person may be about obtaining a partner or finding new romantic attention, the more depleted and inadequate they may feel about themselves.

When self-love is lacking judgment becomes impaired; a woman is more desperate to couple up and is so lost in this pursuit that she has difficulty making an accurate assessment of who the person really is and if he can truly meet her needs. When partners are idealized, the illusion is destined to dissolve, leaving the woman depleted and with a greater sense of inadequacy.

Building self-love is a process. A helpful first step is to notice if you are putting all of your energy into making a relationship work or to finding the perfect match. Take a step back and consider if you are hoping someone else will provide you with something only you can develop. Ask yourself if you have a tendency to idealize your romantic partners and then are left deflated when you discover who they actually are. If you tend to camouflage what you consider unlovable about yourself through attaching to highly desirable, oh so important men, refocus, not on another potential mate, but on yourself.

Jill P. Weber, Ph.D. is a clinical psychologist and author of Having Sex, Wanting Intimacy—Why Women Settle for One-Sided Relationships.

Guess what? Waiting for a man to fix your life will only lead to disappointment and pain. Only you can fix what’s wrong in your life.  It’s okay to seek help- a therapist can help you identify what you don’t like about yourself and what you don’t like about your life. Through self-examination, you’ll see what’s wrong and feel empowered to change your situation. Empowering yourself not only will improve your self esteem and self confidence, but you will stop having to wait for someone else to “fix” you.

Empowering yourself will also help you to avoid the “bad relationship” trap- you will see yourself having higher standards in a partner. This will minimize the chances that you’ll end up with the wrong person just because you’re lonely or desperate. And if you do end up with the wrong person somehow, you’ll realize that you deserve better and move on.

I love the picture I found for this article- don’t you just love her confidence? Cheers to you if you’re that confident! (I gotta try that hairstyle!)

Apple, the most profitable company of its kind in the United States, has been dodging taxes in a somewhat interesting way — by declaring subsidiary companies that are “stateless” and saying that they don’t have to pay taxes to any country. While their scheme is, in actuality, much more complicated than that, it demonstrates the basic premise of their tax avoidance setup — gall.

And in cheating both the United States and other nations this way, Apple has profited by billions.  Nelson D. Schwartz and Charles Duhigg of The New York Times report,

The investigation is expected to set up a potentially explosive confrontation between a bipartisan group of lawmakers and Timothy D. Cook, Apple’s chief executive, at a public hearing on Tuesday.

A drilling rig- courtesy of LiveScience.com

Earthquakes triggered by fluids injected deep underground, such as during the controversial practice of fracking, may be more common than previously thought, a new study suggests.

END_OF_DOCUMENT_TOKEN_TO_BE_REPLACED

“Other major private student lenders and KeyBank competitors have implemented policies forgiving the student loan debt of dead beneficiaries- Wells Fargo, Sallie Mae, Discover, and Citi Financial among them. In addition, loans guaranteed by the federal government are automatically discharged on proof of death.”

“Collection calls are the most callous kind of reminder that you’ve lost a loved one, and I got them every day.”

Visit Change.org to read more about this mother’s painful story and sign her petition to have Key Bank and American Education Services (AES) forgive her son’s loan. Banks are rich enough- it is disgusting that they aren’t willing to just leave this single mother and her family alone so that they might grieve in peace.