How on Earth does this not constitute torture? And how on Earth is this legal?!? What is Pres. Obama thinking? And how does he explain this to his children?

As Ramadan begins, more than 100 hunger-strikers in Guantánamo Bay continue their protest. More than 40 of them are being force-fed.

In this four-minute film made by Human Rights organisation Reprieve and Bafta award-winning director Asif Kapadia, US actor and rapper Yasiin Bey (formerly known as Mos Def), experiences the procedure.

From The Daily Beast:

The gagging can be extreme even when patients are relaxed and cooperating by swallowing repeatedly during the procedure. Resisting the tube during its insertion, as the unwilling detainees at Guantanamo do, elicits an exacerbated rapid cycle of gasping for air and gagging or vomiting.

Why is the U.S. government initiating this new round of forced gagging? It may be simply to save itself from the potential embarrassment if a majority of detainees die on a principled hunger strike.

“We believe it’s wrong to force feed at any time but it is particularly upsetting to do it through Ramadan,” said Ibrahim Hooper, spokesman of the largest US Muslim civil rights and advocacy group, the Council On American-Islamic Relations (CAIR).

“It’s not just a religious issue, it’s also a human rights issue in violation of international norms and medical ethics.” 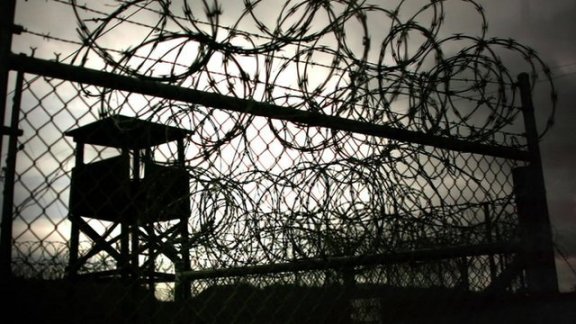 A federal judge Thursday ordered the government to stop genital searches of Guantanamo Bay detainees who want to meet with their lawyers, concluding that the motivation for the searches is not to enhance security, but to deter the detainees’ access to attorneys.

“As petitioners’ counsel argued, the choice between submitting to a search procedure that is religiously and culturally abhorrent or forgoing counsel effectively presents no choice for devout Muslims,” one of the judges of the case wrote.

Brent Rushforth, a lawyer for two of the detainees, said that the Obama administration “is flouting rule of law as recognized by the Supreme Court.”

Just over 100 of the 166 prisoners remaining at Guantanamo have been on a hunger strike for four months to protest their indefinite detention.

The prison officials have now taken to force-feeding them, a very painful procedure that many observers consider torture.

When Edward Snowden revealed what he knew about the U.S. government’s PRISM spy program, carried out by the National Security Agency (NSA), some reacted with horror, others with apathy, and still others with cynicism. Well, there are some very good reasons why, if you are not horrified, you should be. That article is one demonstration of why.

People, like me, who were first horrified are now angry. We say, “It’s not right! And it does matter!” What is happening right now in Guantanamo Bay prison matters to the people who are suffering there. They are suffering because their rights are being violated. The judge deemed the searches illegal- the searches violated the prisoners’ rights.

What PRISM and the PATRIOT Act (and any other spy program the NSA may be engaged in) has everything to do with rights. Why? Because these programs violate our rights in myriad ways. They are, as we speak, monitoring our phone calls, internet activity including emails, and who knows what else. They are allowed to enter our homes without warrants, which means that they can barge into your home at anytime and flip through you belongings to look for “evidence” of terrorist activities. Phone calls, etc., can also be used as evidence.

What’s especially scary about all this is that only a secret court can approve of the NSA’s activities, not a regular court. This is most likely because the government knows full well that a regular court would never sign off on what they are doing, since this activity violates the American Constitution. And since it is secret, none of us can get a peek at what exactly is being done, yet it is still allowed.

Another examples of what happens when rights are violated:

The Case of  the “Ford Heights Four,” according to InnocenceProject.org:

In 1978, along with friends Dennis Williams and Willie Rainge, Kenneth Adams was convicted of gang-raping and murdering a twenty-three year old woman and murdering her fiance. Adams was sentenced to seventy-five years in prison, Williams to death, and Rainge to life without parole. The fourth man, Verneal Jimerson, was convicted and sent to death row. The four young men convicted for this crime were to become known as the Ford Heights Four.

The state’s chief witness in the case, Paula Gray, claimed to have been at the scene of the crime with the four men. After her testimony secured indictments of all four men, she recanted and the charges against Jimerson were dropped.

In all, the Innocence Project found that due to eyewitness misidentification, false confessions/admissions and unvalidated or improper forensic science, the trial against them was unjust. The police and the justice system allowed these problems to go unchecked during the trial. And that the men were black surely had a hand in how badly the trial went for them. Eventually, through new DNA evidence, they were found innocent. The Ford Heights Four settled civil claims for $36 million against the police officers involved in the original investigation. The men were released from prison in 1996 after serving 17 and a half years in prison.

If these men had had their rights recognized, the fraud that took place in the trial wouldn’t have happened. It wouldn’t have been allowed.