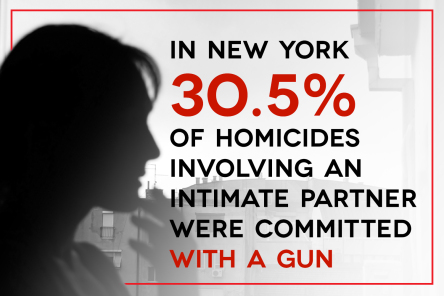 I recently received this message in an email from a group called Americans for Responsible Solutions, of which I am a member. It was started by Congresswoman Gabby Giffords and her husband to fight for gun control laws:

Victims of domestic violence and stalking are at an unacceptable risk of gun violence. In fact, 30.5% of people in New York killed by their intimate partners were murdered with a gun.That number is unacceptable.

But there’s a bill in Congress that will make it much more difficult for convicted stalkers and abusers to own a gun. Next week, for the first time in history, the Senate will hold a hearing on the links between gun violence and domestic violence.

People need to know the harsh realities of guns and domestic violence if we’re going to change the law. As it stands, the current law doesn’t protect women who aren’t married to their abusers, nor does it protect victims of stalkers. It’s way too easy for thousands of stalkers and abusers to buy or own a gun — and many aren’t even subject to background checks. By spreading the word about how many people are killed by their intimate partners with guns, we can put pressure on Congress to help reduce gun violence.

It’s baffling to me why anyone already convicted of abuse or stalking would be allowed access to a gun. Getting a restraining order is notoriously difficult for any woman, no matter how afraid she is of a man. Verbal threats made by a potentially dangerous person aren’t enough in many cases to require police intervention. If fearful women could at least be assured that dangerous people in their lives are prohibited from owning guns, that would surely provide some relief to frayed nerves.