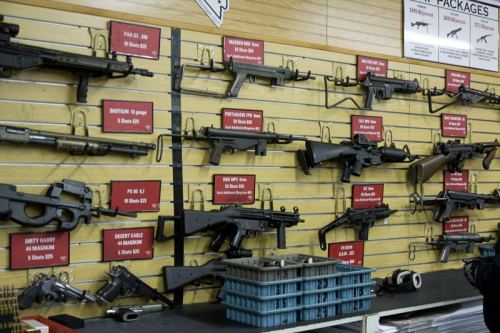 Propublica.org, an independent online news organization, has compiled a thorough collection of gun-related articles on their website. It’s a great resource for anyone wanting a deeper understanding of gun violence in America.

The website lists a variety of gun-related articles and research, grouped by subject/issue. Issues covered: Are mass shootings increasing?; gun deaths among women and children; the NRA; how politics protect gun dealers who sell guns used in crimes; “Stand Your Ground” laws; and others.

An excerpt from a “Gun deaths among women & children” article:

A New York Times review of hundreds of child firearm deaths found that accidental shootings occurred roughly twice as often as the records indicate, because of idiosyncrasies in how such deaths are classified by the authorities. The killings of Lucas, Cassie and Alex, for instance, were not recorded as accidents. Nor were more than half of the 259 accidental firearm deaths of children under age 15 identified by The Times in eight states where records were available.

As a result, scores of accidental killings are not reflected in the official statistics that have framed the debate over how to protect children from guns.

Legislative and other efforts to promote the development of childproof weapons using “smart gun” technology have…stalled. Technical issues have been an obstacle, but so have N.R.A. arguments that the problem is relatively insignificant and the technology unneeded.

You’ll find that the articles also address many of the false claims gun rights advocates, including the NRA, use to block any attempts at gun-control legislation.