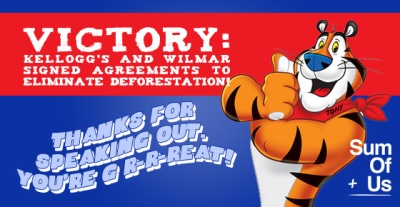 I’d like to share with you some wonderful progress being made by activists. Below is part of an email I received recently from SumOfUs.org, an organization that uses petitions to put pressure on governments and corporations to achieve reform, and which I support by passing on petitions I get from them:

After months of organized pressure against Kellogg’s and its massive partner Wilmar International — a palm oil company that Newsweek named the “world’s least sustainable corporation” — both companies are taking action to protect the rainforest!

Kellogg’s and Wilmar have both signed commitments to eliminate deforestation from their supply chains in the next two years — in what the Guardian called a “major success for environment and consumer groups”. We played a key role in pushing these companies over the line. Here’s just a few of the things we did together:
•Bombarded Kellogg’s with hundreds of thousands of petition signatures and thousands of phone calls
•Worked with organizers in Michigan (where Kellogg’s is based) to pressure executives on their home turf, generating reams of media coverage
•Delivered tens of thousands of personal messages to Kellogg’s CEO, and met personally with the company’s head of sustainability
•Put the campaign on investors’ radar, who proposed the issue for discussion at the company’s AGM to increase the pressure
•Helped publish a report that exposed Wilmar’s role in illegal destruction of orangutan habitat

Kellogg’s commitment raises the bar for other consumer companies — who we’re getting ready to target soon. And because Wilmar controls nearly half the world’s palm oil trade, this could represent a massive sea change in the industry. We’re working with partners to make sure they implement their commitments on the ground — groups like Catapult Campaigns, Rainforest Action Network and Greenpeace — all of whom were crucial in winning this campaign, too.

This is great news for Tony the Tiger, and for the survival of Southeast Asia’s rainforests. It’s one of our biggest victories to date as a community — and a very, very big deal.