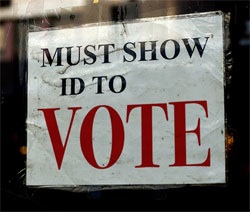 The American Civil Liberties Union (ACLU) has been working to overturn voter ID laws all over the country, and this represents a major victory for them, as they were one of the plaintiffs in the case that challenged the constitutionality of voter ID laws in Pennsylvania and won. This case also represents the change that the public can bring about when we put our thoughts and actions to a cause!

On ACLU.org, the article about the case said that the judge ruled:

There is little doubt that the burdens the Voter ID Law imposes weigh most heavily on the most vulnerable members of society. Voting laws are designed to assure a free and fair election; the Voter ID Law does not further this goal.

Disenfranchising voters ‘through [no] fault of the voter himself’ is plainly unconstitutional.

In addressing the ridiculous business about “voter fraud” as the reason for voter ID laws being enacted, the article said:

Litigation is a wonderful tool because it gets at the truth, and in this case that meant putting the lie to the voter ID law’s proponents that ID is required to prevent rampant fraud. When pressed to identify the fraud, the commonwealth was unable to point out a single instance of the type of fraud that would be prevented by the ID. The court responded by saying that “a vague concern about voter fraud does not rise to a level that justifies the burdens constructed here.”

NewsOne.com, an African-American online news organization, had this to say about the ruling:

Stating time and again that the law would disenfranchise voters, particularly voters of color, the advocates are relishing their victory today.

This ruling is a victory for all those who believe that in a democracy, elections should be free, fair, and accessible to all people. Hundreds of thousands of Pennsylvania citizens who lack one of the limited forms of acceptable photo ID can now cast their ballots without burdensome obstacles.